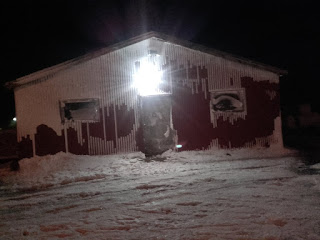 Margret Hermann's archaeologist began excavation in the Westman-island in the summer of 1971 and work five summers there. The excavation revealed that settlements in the Westman Islands were much older than previously thought or from the early 9th century.
Birt af ÓKA kl. 22:00 Engin ummæli:

In the volcanic eruption of the Westman Islands in 1973, the lava stopped in the water tank. The ruins of the water tank still stand today.
Birt af ÓKA kl. 21:52 Engin ummæli:

The island of tragedy

The Westman Islands are a very interesting place. If you are lucky to go where a car ferry sails when the weather is good. The island is a very old fisherman's town and the people have a very special history. Once there was an eruption and all the inhabitants had to flee on their boats, and the town went under  the ashes. Later they dug up the town. Once the Turks came with two warships and invaded the island. They killed a lot of people, but many people were able to flee to the cliffs, saving their lives. Turks robbed many women and children and sold into slavery. Later some could bauy freedom and come back.
The people on the island are very friendly and there lives also a special bird called 'Lundi' (Fratercula arctica) which was caught for food in the old days.
The first inhabitants of the island were slaves as wrecks from the Vikings.  Later, fishermen moved there, providing good conditions for fishing.

Walk on the water

By the town of Eyrarbakki is a beautiful beach and popular for walking and children's games. There is also a lot of bird life on the beach that many people enjoy watching.

Walk around the waterfall

In Iceland there are thousands of waterfalls and many very beautiful. This can be walked around and is called 'Seljalandsfoss'. There is a small shop for coffee and souvenirs.

Vik is a lovely town between the East and the West Coast. The highway is around town and a popular bus stop. Young and old lovers enjoy walking on the beach listening to the voice of the ocean and experiencing hot kisses.
Birt af ÓKA kl. 18:05 Engin ummæli: